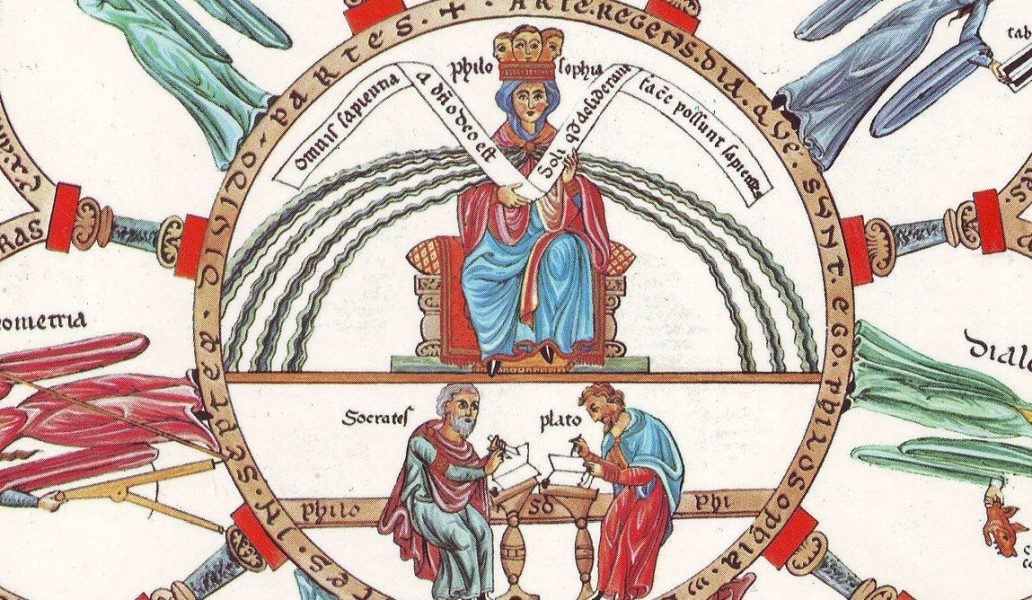 The Liberal Arts of the Trivium (pt. 1)

The liberal arts have fallen on hard times. Of course, I don’t mean that bachelor’s degrees from liberal arts colleges are in decline. The presidents of liberal arts colleges across the nation can wax eloquent about the importance of the “liberal arts,” by which they mean general studies, rather than a purely technical job-focused degree. And I agree with them as far as they go. It is true that the round of general studies required at a liberal arts college may better prepare our graduates for a world in which they are likely to change careers many times, and the job they end with may have no connection with their major in college. A 2015 study by the Bureau of Labor Statistics found that young baby boomers (born 1957-64) changed jobs on average 11.7 times between the ages of 18 and 48. If that’s the case for the baby boomer generation, what’s it going to be for our young millennials? Or there is this article I read last year in which a Google vice-president announced, “We are going through a period of unbelievable growth and will be hiring about 6,000 people this year – and probably 4,000-5,000 from the humanities or liberal arts.” Why so many in humanities and not techies, you might ask? Well, this vice president explained, “Developing user interfaces, for example, was at least as much about knowing how to observe and understand people as about pure technological skill.”¹

So, general studies or the humanities have not fallen on hard times, but I still assert that the liberal arts have. And that can be represented by that fact that we do not even know what we mean by liberal arts anymore. In 1947 Dorothy Sayers sent out the clarion call for a return to the liberal arts of the Trivium in her Oxford address, “The Lost Tools of Learning,” and her analysis of the problem is strikingly up to date:

“Is not the great defect of our education today… that although we often succeed in teaching our pupils “subjects,” we fail lamentably on the whole in teaching them how to think: they learn everything, except the art of learning.”

Here we have it in a nutshell, the liberal arts are not subjects, but the lost tools of learning! And while modern teachers and schools busy themselves about teaching their students many subjects and endless amounts of information, carefully planning and preparing their colorful PowerPoint lectures, and though school boards and textbook writers pore over and argue about the perfect presentation of material, they all too often fail with many of their students, who aren’t the self-motivated, self-starter, natural learners. Of course, the self-learners get along fine, whatever we do; they can’t be the test of our teaching practices. But college professors I know regularly lament how, in spite of soaring SAT scores, and good grades, more and more students are coming in to their introductory classes, with poor writing skills, turning in short papers, riddled with grammar and punctuation errors, simplistic research, incorrect documentation, and bland and uncreative trains of thought. Yet these same students have studied well, tested well, performed well on all the multiple-choice tests in the subjects they have “mastered”!

The sad fact is they have been taught ‘subjects’ or what the classical tradition called sciences, they have been tested on them and have promptly forgotten them; but they have not been taught the arts of learning, or the Trivium, the three-fold path of Grammar, Dialectic and Rhetoric. And as the classical tradition warned, the learning of subjects or sciences before the liberal arts is all too often labor spent in vain. It is like giving a man a fish, rather than teaching him to fish. As Dante put it in his Divine Comedy, “Much worse than uselessly he leaves the shore, / More full of error than he was before, / Who fishes for the truth, yet lacks the art.” The arts of fishing for the truth, the tools of learning, which are initially harder, more labor intensive, a steeper climb, and seem to yield slower progress, than simply giving students the “right information,” in the end are actually the shortest route to our true object. And that is to teach students to learn for themselves. As Dorothy Sayer hauntingly closed her address,

“What use is it to pile task on task and prolong the days of labor, if at the close the chief object is left unattained? It is not the fault of the teachers–they work only too hard already. The combined folly of a civilization that has forgotten its own roots is forcing them to shore up the tottering weight of an educational structure that is built upon sand. They are doing for their pupils the work which the pupils themselves ought to do. For the sole true end of education is simply this: to teach men how to learn for themselves; and whatever instruction fails to do this is effort spent in vain.”

Or as Charlotte Mason had said before her, “Self-education is the only possible education; the rest is meer veneer laid on the surface of a child’s nature.” And therefore, the students must do the work of learning for themselves.

Well, at Clapham School, this principle of teaching students to learn for themselves, and the specific arts of the trivium, the well-worn paths of grammar, dialectic and rhetoric, inform everything we do. And we have found in practice, that when we as teachers focus, not primarily on subjects, or content as an end in itself, but on teaching students the liberal arts of grammar, dialectic and rhetoric, on cultivating the habits and intellectual virtues of reading and interpretation, of discussion and logical thinking, of beautiful and persuasive expression, then our labors are not spent in vain, but students become the self-motivated agents of their own learning. Join us in the following three blog articles for our brief jaunt through the trivium, as our Lower School Principal, Christine Escareño, guides us on the path of grammar; then our Secondary School Principal, Kolby Atchison, leads us on the road of dialectic; and finally, I as Academic Dean, race us back home by way of rhetoric.