Clapham School was conceived in 2005 to meet a felt need for an academically rigorous and distinctively Christian school in the Wheaton area. Interested families began discussing plans for the school in late 2005 and began praying together weekly to seek God’s guidance in that effort. The school’s formal journey began in the fall of 2006.

Along with a passion for a Christian school of excellence, preparing students for a life of service to Christ was a key component in the school’s inspiration, which led to the name, Clapham School.

Clapham is today a district of southwest London. In the late 18th and early 19th centuries it served as the location for worship and fellowship for a group of believers who became known as the Clapham Saints. Their devotion to Christ helped change countless lives in London and beyond.

Perhaps the most famous member of the Clapham Saints was William Wilberforce. As a young student at Cambridge in the 1770s, he turned away from his evangelical youth and pursued a worldly lifestyle. He eventually became one of the youngest and most charismatic members of the British parliament. His life changed, however, after taking two trips to the New Continent with a dear friend and mentor, Isaac Milner. It was on these trips that he immersed himself in his own study of the classics and Scripture, was convicted of the depth of his sin, and turned to Jesus Christ as his Savior.

William Wilberforce felt compelled to retire from public life and parliament, but after some counsel was persuaded instead to use his position of influence to serve Christ. He dedicated his parliamentary life to the abolition of slavery, and he and his friends, dubbed the “Clapham Saints”, labored over twenty years until the slave trade was abolished. Wilberforce then lobbied another twenty-five years for the emancipation of slaves. Three days before his death, Wilberforce was sent word that the House of Commons had outlawed the institution of slavery. 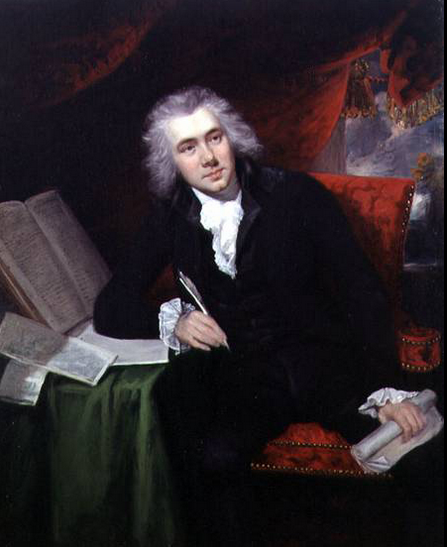 Other members of the Clapham Saints included Hannah More, a well-known writer and social reformer who advocated for the poor and for the education of women. Undaunted by ridicule or opposition, and tireless in their cause for moral reform, this community established numerous Christian societies and published volumes of Christian literature and moral tracts for the improvement of society. For instance, they founded the British and Foreign Bible Society and the Church Missionary Society, and they even led the charge for prison reform.

Wilberforce and his friends understood the calling of the Christian to stand for what is right. They believed in the Word of God and lived under the compulsion of its commands. Together they stood against the powerful tide of their culture, serving Jesus Christ, and encouraging one another in the cultivation of all that is good, true and beautiful in the midst of a broken and stained world.

by cultivating His goodness, truth, and beauty in the world.

Clapham School inspires students with an education founded on a Christian worldview,

informed by the classical tradition, and approached with diligence and joy.